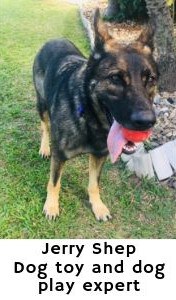 Playing tug of war with dogs

Many of you humans wonder if tug of war is a safe game to play with us dogs. Will it hurt our mouth or break our teeth? Will it make us bad angry dogs? Well, it’s true that, if the game is out of control, we can be hurt and that’s not good. But played safely with the right rules it’s a good thing for us dogs and you humans can enjoy a game too. It’s good exercise for our teeth and muscles.

We love being tug of war dogs

Most of us dogs love to play tug of war it takes us back to the days when we used to be pack hunters. Humans who think it’s a bad idea to play tug of war with us must know most of us love it and if you teach us the proper rules (just as we were taught the rules in our pack hunting days) Dog tug of war keeps our brain active and gives us some great fun exercise.

In our far-gone hunting days, tugging and pulling with our brothers and sisters and others in the pack, was also a way of enjoying play together and getting to know each other better. Now we can play a game with our humans that brings us closer together – as long as we dogs and you humans know the rules!

When not to play tug of war with a dog

It’s pretty bad if you have not trained your dog well enough to be friendly and playful and like most people but if you do have a dog like this, talk to the vet about the behaviour or ask a dog training expert how to handle this. Just don’t play tug of war!

Tug of war with puppy

Just don’t play tug of war with a puppy. When a dog is very young or a puppy and they are still forming their adult teeth, its not a good idea to play dog tug. While our teeth and jaws are still growing, tugging too much can cause jaw or teeth problems later on.

What are the basic rules of safe dog tug of war?

How to play dog tug of war When to stop playing dog tug I think you should let us dogs win a game now and then but some of you human ‘dog experts’ seem to think that we dogs should not be allowed to win. Me? I think letting me win just sometimes makes me trust you more and that brings us closer together.

Keep the rules of dog tug the same

Last point is that there is no point in you trying to teach us some rules for tug of war if your human buddy comes along and decides to play by another set of rules – that’s just confusing so if a friend or someone else in our pack wants to play, then make sure they know the rules we’ve agreed on. Canine Confidential: Why Dogs Do What They Do

This related article will tell you a bit more about dogs playing and their favorite quality toys.

Jerry reviews his favorite quality dog toys and puts in a few suggestions for the little ones and pups too.

Jerry Shep explains the importance of play in helping a dog grow to be a good, friendly and loved member of the family pack

Jerry explains how dog play is not just fun for all but it is healthy and play can stop humans taking their dogs to the vet as often.

A little understanding of what dog’s think (or at least what Jerry thinks) should help you humans bond better with us dogs. Read more here

Looking for something? Search here

At dogspeaking.com our mission is to give as much sensible, free advice to human dog lovers the world over to improve the life of as many dogs as we can. Our team of dog writer give easy and practical tips to make sure you have a dog as Pawsome as those on the dogspeaking team.

Let's hear from you